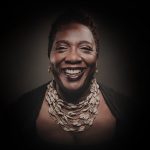 My involvement in music has largely been inspired by my family, good friends, exceptional music teachers & the city I grew up in. My Mum (the greatest human being I know and my driving force) – introduced me to Sam Cooke, Nat King Cole & my first tastes of classical music & jazz. My Dad – an avid James Brown & funk fan, and my four siblings played me everything from roots & soul to progressive rock. Growing up in the 70’s & 80’s filled in the blanks.

I got deep into the new romantic & alternative movement with the help of my best mate and her older brother who took us to places we weren’t old enough to go. And from across the pond, anything and everything, U.S. soul, hip-hop & disco electro funk and rock.

All the schools I attended had strong music programs so I was always involved. Choirs, musicals, pop bands, concerts, recitals music competitions were all the norm, and was thankfully encouraged.I had my first classical singing lesson at 10, & stuck with it until I was 20. Meanwhile joining various local bands as a lead or backing vocalist until my favourite of those bands, Soul Station decided to aim for the big time.

As a strong if naive unit, we ‘up sticks’ and moved from our home town of Leicester to the Big Smoke – London. The choice was find a job or go to college while we got ourselves organised. After a couple of failed attempts at trying to get onto an opera course (yes opera), I had the good fortune to get a tip from one of the guys in the band that The Royal Academy of Music had a jazz course. I auditioned, got in, and never looked back!

“This place was like a sweet shop. You got to play, write and study music all day long with the cream of ‘up and coming’ British talent not just in jazz, but classical and commercial music too.”

Soul station (now re-named Yum Yum) had pretty much given up trying to make it as a 7 piece Funk band was next to impossible, but we continued to gig just for the fun of it.

House isn’t my only love. I remain a member of Grupo X, a Latin Soul group and Detronic, a Live House music outfit. Buttaball, my left-field Electronic Duo, with one of the original founder members of Soul Station – Jonny Machin, has always been dogged with problems. Losing Jonny in 2018 was a tragic loss to me and a major setback to our joint project. Thus, I’ve created ‘bettiquette© Records’. Dedicated to my mum & Jonny and the Jazz records I’ve yet to make and the other genres I’ve yet to explore…